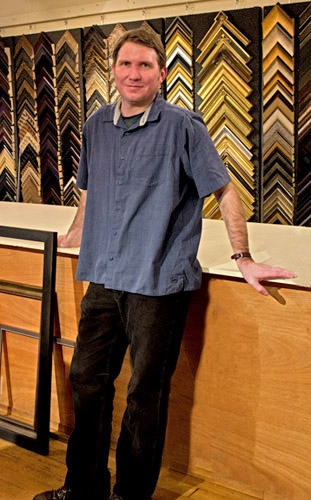 Frameworks owner Paul Hemminger is a Pacific Northwest native with 20 years of experience in the framing industry. “Enhancing artwork by being creative with framing has always held my interest.”

Paul was led to framing by his love of photography. Earning respect as a freelance photographer, he worked for such companies as Mitsubishi, Quick Silver, Urban Decay, Billabong, Hurley, Vision Streetwear and Hard Candy. It is when he traveled to California and partnered with the owner of Thumbs Up, a photography and framing company, that he discovered he enjoyed framing pictures as much as he enjoyed photographing them.

Paul returned to Bellingham after a few years and went to work for The Hang Up Gallery, where he was promoted to manager of the picture framing department. After seven years, he was presented with the option to buy the company’s framing business and the rest is history— FrameWorks has been open since 2005!